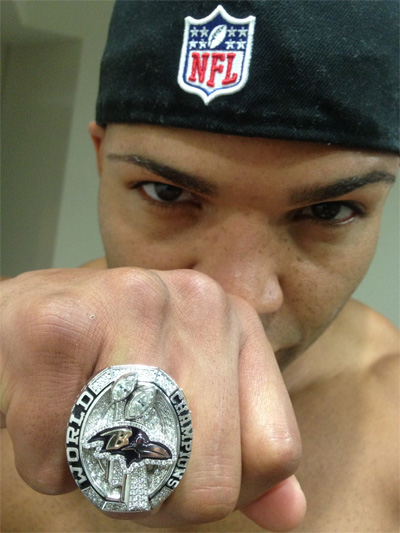 The Baltimore Ravens may have lost the two most important players in franchise history in Ray Lewis and Ed Reed this offseason, but that certainly wasn’t bringing anyone down on Friday. Just about everyone on the team that won Super Bowl XLVII received the ultimate tangible reward relating to such a victory — Super Bowl rings. Lewis, who retired after the win, and Reed, who signed with the Houston Texans, attended the ceremony at the team’s headquarters in Owings Mills, Md.

“I always told them I wanted them to really feel what the confetti felt like,” Lewis said. “Now to be here, to have something that symbolizes it, it’s the ultimate because now it connects us forever. It took me 12 years to get back and get another ring. I want them to cherish what this moment feels like right now while we’re world champs.”

Lewis was the lone player who was able to wear the two rings the franchise has earned — this new one, and the one the 2000 team won with a 34-7 thrashing of the New York Giants in Super Bowl XXXV. For the younger guys, it was the first ring, and the experience was surreal.

“To have it so close, it finally hit me, what exactly we accomplished together,” defensive end Terrell Suggs said after the rings were presented. “It didn’t take a year. It took me 11 years to get it. It took Coach [John] Harbaugh [from] when he got here in 2008. It finally paid off, all that blood given. There’s not a word that describes what I’m feeling and all the emotions. The journey was long, but it was worth it. I will tell you this — I damn sure want to feel like this again.”

Lewis and quarterback Joe Flacco, who put up an MVP performance in the Ravens’ 34-31 win over the San Francisco 49ers, had input on the design of the ring. Designed by Jostens, the ring has 40 round-cut diamonds outlining the Ravens’ logo, and the franchise’s two Lombardi trophies. Inside the ring, one will find one of Harbaugh’s mottos — “The team, the team, the team” — and the scores of the Ravens’ playoff wins.

Ravens owner Steve Bisciotti ensured that John and David Modell, sons of the late former team owner Art Modell, were present for the ceremony and received rings. However, receiver Anquan Boldin and safety Bernard Pollard did not attend. Boldin was traded to the 49ers in the offseason, and Pollard signed with the Tennessee Titans, Those were two moves in a post-Super Bowl roster shake-up that also saw star outside linebacker Paul Kruger sign with the Cleveland Browns.

“It really symbolizes that this is the last time we’re all going to be together as a team, and it’s definitely a special moment,” receiver Torrey Smith said. ” I didn’t cry or anything, but I can see how women feel when they get a ring. It has a lot of different meanings. There will never be another season like this. We can win the Super Bowl every year while I’m in the league, and there will be nothing like this one.”