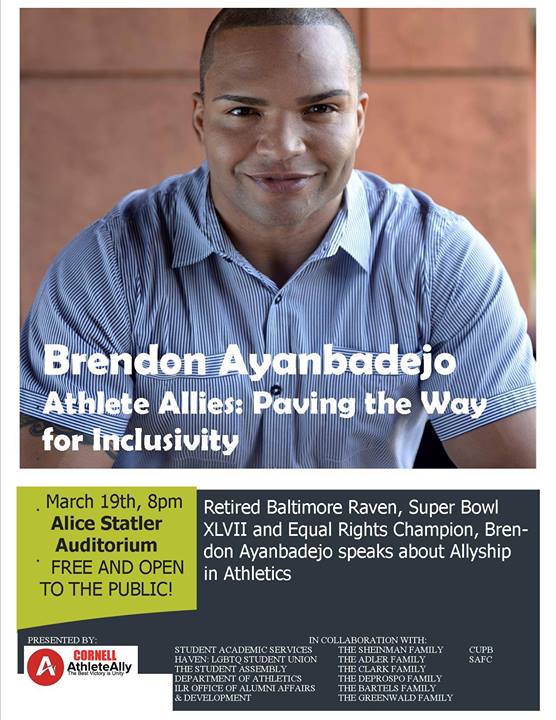 Former NFL player and Super Bowl champion, Brendon Ayanbadejo, spoke about paving a way for inclusivity in sports on next Wednesday in the Alice Statler Auditorium at 8 p.m. The event, which was free and open to the public, was  hosted by Cornell’s chapter of Athlete Ally, which is in its first year of existence on campus.

“We’re hoping, with our first annual speaking event, to help gain awareness and reach out to various communities to make them aware of what we’re trying to do,” said junior Atticus Deprospo, the president of Cornell’s chapter of Athlete Ally.

After graduating from UCLA, Ayanbadejo signed as an undrafted free agent with the Atlanta Falcons in 1999. Ayanbadejo bounced between the NFL and the CFL until 2005, when he was signed by the Chicago Bears. He was selected to two consecutive Pro Bowls for special teams while with the Bears, and was traded to the Ravens in 2008. In Baltimore, he played for four seasons, which eventually culminated him winning a Super Bowl title in 2013.

Brendon Ayanbadejo is one of many professional athletes acting as ambassador for Athlete Ally, fighting for LGBT equality in sports

Throughout his career, Ayanbadejo has been a staunch advocate for the LGBT community. He has appeared on CNN and Meet the Press, and has helped promote the mission of Athlete Ally — an organization that is focused on “educating the athletic community and empowering them to take a stand” against homophobia in sports, according to the organization’s website.

Ayanbadejo is a member of the board of directors of Athlete Ally and a regular public speaker for the organization. As one of almost 100 professional ambassadors for Athlete Ally — which includes Kenneth Faried, Andy Roddick and Abby Wambach — Ayanbadejo says that, “we all can be ourselves and still compete with dignity and at the highest level,” according to Athlete Ally’s website.

According to DeProspo, bringing a high-profile athlete to speak to the Cornell community will make a significant impact on spreading awareness.

“Having a professional ally that people can identify and recognize will help people to start thinking about how their actions and words will have an impact on the people around them,” DeProspo said.

Ayanbadejo and his longtime partner, Natalee Uzcategui, have a six-year-old daughter and a 22-month old son. According to DeProspo, Ayanbadejo’s interracial relationship, which, when his parents were married, was considered illegal, is part of what has motivated his participation in Athlete Ally.

“It’s a close to home issue for him, so he was inspired to make athletics more inclusive,” DeProspo said. If your company is interested in hiring Brendon Ayanbadejo to speak at your event, contact AthletePromotions.com at 1.888.246.7141.